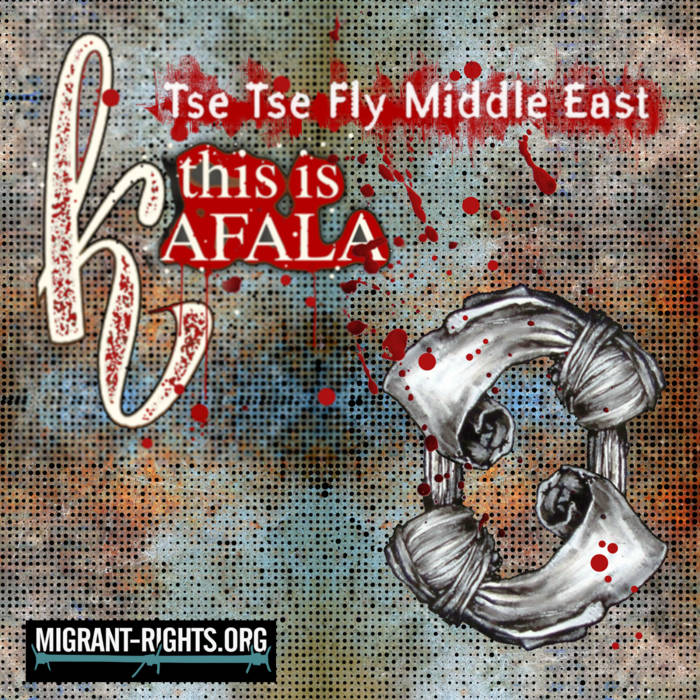 'This Is Kafala' is a collection of experimental music, sound art and noise tracks created specifically for this project by a selection of composers and artists that includes Tse Tse Fly Middle East founder members alongside creators and friends that Tse Tse Fly have worked with over the years. Contributors hail from Egypt, Pakistan, Kurdish Iraq, Lebanon, Sri Lanka, Tunisia / Palestine, Jordan, the Philippines, and the UK. Kafala is the system of modern-day slavery used to exploit migrant workers by oppressive regimes in the Middle East. Under kafala (kafala is Arabic for sponsorship), migrants travelling from surrounding regions to work in these countries must surrender all their rights to their local sponsor. The extremes in exploitation that ensue are likened to modern-day slavery, with workers made to suffer unsafe working conditions, long working hours, squalid accommodation, confiscation of passports, low pay, physical and sexual abuse, and torture.

The album’s tracks examine and explore themes around kafala, exploitation and modern-day slavery, and is a disorientating, difficult listen that reflects the true nature of the kafala system.

Saulat Qadri’s 'Bonded' piece is built around quotes from the Human Rights Commission of Pakistan call for an end to bonded labour and extracts from Asher John’s documentary film 'Generations in Bondage'. Ubu Kung’s 'Wala Kung Hindi Paalam' track is performed in Tagalog, the language of the Philippines, and can be translated as 'nothing if not goodbye'. The Achrafieh track 'Waltz For Latha' is a collaboration between members of the Tse Tse Fly Middle East collective and is dedicated to a Sri Lankan lady who works as a cleaner in the UAE.

Hardi Kurda and Khabat Abas’ 'The Moment' is a live improvisation made using a radio and prepared cello. Mariam Rezaei’s 'Siren' was created using two turntables and Checkpoint 303’s piece 'Kafa Kafala' (translation: enough kafala) features the voices of Ethiopian workers talking about their experiences under the kafala system. The XLMXKHFI track 'Elegy' incorporates sounds of broken glass being swept up after the August 2020 explosion in Beirut, and the vocal text is from the last ever poem by Abdel Wahab Yousif (also known as Latinos), the Sudanese poet who drowned while trying to cross the Mediterranean into Europe in the Summer of 2020.

The 'This Is Kafala' project is produced in association with Migrant-Rights.org, the non-profit organisation that advances rights of migrant workers throughout the Middle East.

Everyone involved has given their time for free, and profits from sales will go to charities and NPOs that are working towards ending kafala. The entire album was a remote collaboration created during the coronavirus pandemic. Some artists have chosen to record under a pseudonym in order to protect their own identities.

Saulat Qadri - Bonded
voices: Saulat Qadri, Asher John & Advocate Kashif Namet
produced by: Saulat Qadri
special thanks to: Human Rights Commission of Pakistan (HRCP) for the support and for its permission to use excerpt from the ‘Call for renewed zeal to end bonded labour’ report and Asher John for his permission to use sound clips from his documentary ‘Generations in Bondage: A documentary on bonded labour in Pakistan’.

Founded in the UAE and now based in London, Tse Tse Fly Middle East is a nonprofit arts platform that uses live interventions to highlight human rights and freedom of speech issues. Releases here are our noise/sonic projects and collaborations.

Bandcamp Daily  your guide to the world of Bandcamp